Today, we are going to be praying and liberating souls from the kingdom of hell by the power in the name of Jesus. God does not want any soul to go to hell. That is why Jesus gave us the mandate to preach the gospel so as to harvest the lost souls into God’s kingdom. Jesus told Peter who was a professional fisherman that He will make him a fisher of men. He gave all the believers the mandate to go into the world and preach the gospel. His ultimate desire is to save all men. As we pray today, we will be liberating souls under the bondage of sins in Jesus’ name.

God is Keen About the Liberation of Souls

God has interest in liberating souls. When the city of Nineveh was sinning against Him, He raised Jonah to go and preach to them. They repented of their sins and God forgave them. When Cornelius was living uprightly but did not understand the gospel that would lead to his salvation, He sent an angel to him and instructed him to contact Peter. Meanwhile, God had to appear to Peter in a vision so that he would not refuse to follow them. At last, God saved Cornelius and his household.

There was this Eunuch from Ethiopia who was reading the scripture about Jesus, yet, he did not understand what he was reading. God sent Philip to go and join his chariots so that he could preach the gospel to him. Phillip joined his chariots and told him about Christ and he gave his life to Jesus. When God realized that the Apostles were not doing enough in reaching out to the Gentiles, He had to raise Apostle Paul to go and do the job. God has interest in liberating souls from the bondage of sins. So many souls are on their way to hell and God is depending on you to go and liberate them. We will be praying and liberating souls under the bondage of sins today in Jesus’ name.

For you, LORD, have delivered me from death, my eyes from tears, my feet from stumbling

2. Father, I pray that you will liberate all souls that are still in darkness. Lord, I pray that the light of the gospel will shine in their hearts and they will give their lives to Jesus in Jesus’ name

Those who accepted his message were baptized, and about three thousand were added to their number that day.

3. Father, I pray that you will add millions of souls to your church from all over the world in Jesus’ name.

But many who heard the message believed; so the number of men who believed grew to about five thousand.

4. Father, I pray that many souls will be receptive to the Word of God and they will forsake their evil ways and turn to God in Jesus’ name.

Yet more and more people believed and were brought to the Lord—crowds of both men and women.

The word reached the king of Nineveh, and he arose from his throne, removed his robe, covered himself with sackcloth, and sat in ashes. 7 And he issued a proclamation and published through Nineveh, “By the decree of the king and his nobles: Let neither man nor beast, herd nor flock, taste anything. Let them not feed or drink water, 8 but let man and beast be covered with sackcloth, and let them call out mightily to God. Let everyone turn from his evil way and from the violence that is in his hands. 9 Who knows? God may turn and relent and turn from his fierce anger, so that we may not perish.”

10 When God saw what they did, how they turned from their evil way, God relented of the disaster that he had said he would do to them, and he did not do it.

6. Father, I pray that just like you saved Zacchaeus, many will start having unusual encounters with Jesus and they will surrender their lives to God in Jesus’ name.

Jesus said to him, “Today salvation has come to this house, because this man, too, is a son of Abraham.

7. Father, let there be a divine visitation to all those who are thirsty and longing for the Word of God. I pray that your Word will deliver them from the clutches of sins in Jesus’ name.

34 And the eunuch said to Philip, “About whom, I ask you, does the prophet say this, about himself or about someone else?” 35 Then Philip opened his mouth, and beginning with this Scripture he told him the good news about Jesus. 36 And as they were going along the road they came to some water, and the eunuch said, “See, here is water! What prevents me from being baptized?”[b] 38 And he commanded the chariot to stop, and they both went down into the water, Philip and the eunuch, and he baptized him. 39 And when they came up out of the water, the Spirit of the Lord carried Philip away, and the eunuch saw him no more, and went on his way rejoicing.

8. Father, I pray that you will dispatch your angels to go and reap all souls that are due for harvest into your kingdom. I pray that through this angelic visitation, they will surrender their lives to Jesus Christ in Jesus’ name.

At Caesarea there was a man named Cornelius, a centurion in what was known as the Italian Regiment. 2 He and all his family were devout and God-fearing; he gave generously to those in need and prayed to God regularly. 3 One day at about three in the afternoon he had a vision. He distinctly saw an angel of God, who came to him and said, “Cornelius!”

4 Cornelius stared at him in fear. “What is it, Lord?” he asked.

The angel answered, “Your prayers and gifts to the poor have come up as a memorial offering before God. 5 Now send men to Joppa to bring back a man named Simon who is called Peter. 6 He is staying with Simon the tanner, whose house is by the sea.”

44 While Peter was still speaking these words, the Holy Spirit came on all who heard the message. 45 The circumcised believers who had come with Peter were astonished that the gift of the Holy Spirit had been poured out even on Gentiles. 46 For they heard them speaking in tongues[b] and praising God.

Then Peter said, 47 “Surely no one can stand in the way of their being baptized with water. They have received the Holy Spirit just as we have.” 48 So he ordered that they be baptized in the name of Jesus Christ. Then they asked Peter to stay with them for a few days

9. Father, I pray for all those who are serving gods that are not the living God that they will see the light and have an unusual encounter with God in Jesus’ name.

Salvation is found in no one else, for there is no other name under heaven given to mankind by which we must be saved.”

32 Then they spoke the word of the Lord to him and to all the others in his house. 33 At that hour of the night the jailer took them and washed their wounds; then immediately he and all his household were baptized.

11. Father, I pray that all who are still in darkness will acknowledge you as their Lord and Savior in Jesus’ name.

The name of the LORD is a fortified tower; the righteous run to it and are safe.

12. Father, I pray you will anoint me mightily to bring freedom to the captives and release the prisoners from darkness in Jesus’ name.

The Spirit of the Sovereign Lord is on me, because the Lord has anointed me to proclaim good news to the poor. He has sent me to bind up the brokenhearted, to proclaim freedom for the captives and release from darkness for the prisoners

13. Father, I pray that your Word in my mouth will be quick and powerful and it will prick the hearts of sinners in Jesus’ name. I pray that as I speak the Word of God, sinners will be uncomfortable and they will give their lives to Jesus Christ in Jesus’ name.

For the word of God is quick, and powerful, and sharper than any two-edged sword, piercing even to the dividing asunder of soul and spirit, and of the joints and marrow, and is a discerner of the thoughts and intents of the heart.

14. Father, I pray that all those who are persecuting the church will see the light of the gospel and surrender their lives to God in Jesus’ name.

“As he neared Damascus on his journey, suddenly a light from heaven flashed around him. 4 He fell to the ground and heard a voice say to him, “Saul, Saul, why do you persecute me?”

“I am Jesus, whom you are persecuting,” he replied. 6 “Now get up and go into the city, and you will be told what you must do.”

15. Father, I pray that there will be the sound of the Holy Ghost all over the world that will draw lost souls to your kingdom in Jesus’ name.

When the day of Pentecost came, they were all together in one place. 2 Suddenly a sound like the blowing of a violent wind came from heaven and filled the whole house where they were sitting. 3 They saw what seemed to be tongues of fire that separated and came to rest on each of them. 4 All of them were filled with the Holy Spirit and began to speak in other tongues[a] as the Spirit enabled them.

5 Now there were staying in Jerusalem, God-fearing Jews from every nation under heaven. 6 When they heard this sound, a crowd came together in bewilderment, because each one heard their own language being spoken

The people walking in darkness have seen a great light; on those living in the land of deep darkness a light has dawned.

Stream live on our website from Monday 28th February to 3rd March from 12 noon – 1 pm MST (Prayer Session) and between 7 pm -10 pm MST on Friday, March 4th for our Night of Divine Encounter via this link – Watch Live or through the Church’s Facebook or YouTube Page. 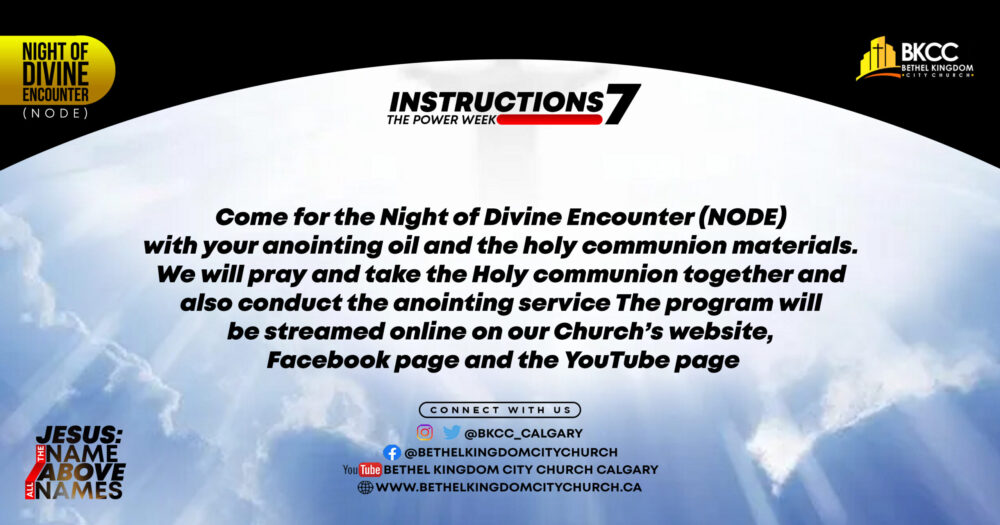